Why the Lemanic Region?

What’s New about a Vitality Assessment?

What ingredients are necessary for a successful and thriving philanthropic sector? To what extent are they already present in the Swiss cantons of Geneva and Vaud? How can the health of the sector in this region be improved? These are the key questions which this study set out to address, using an innovative mixed-methods approach and drawing on the combined expertise of dozens of subject-matter experts and a broad-based Steering Committee.

More than ever, philanthropic foundations are needed to help drive societal progress. At the same time, rising wealth gaps in many countries raise a fundamental question: do those with the resources to change the world merely help maintain existing inequalities? Or do they truly drive progress across society? Creating and retaining the general public’s trust in philanthropic foundations increasingly requires the philanthropic sector to be more transparent and demonstrate which concrete outcomes it funds and what its projects help to achieve. This is best achieved by a dynamic sector.

In light of these dynamics, the purpose of the present study is to generate the insights necessary to further increase the relevance and effectiveness of the philanthropic hub in the Lemanic region, comprised of the cantons of Geneva and Vaud. The Lemanic hub offers a unique cluster of foundations, private donors, international organizations, NGOs, social enterprises, and sector intermediaries who provide professional services to the sector.

If one knows what drives philanthropic sector vitality, one can take action to enhance it—and thereby further increase the sector’s positive contribution to society. To achieve this objective, we thus sought to understand what philanthropic vitality entails, how to measure it, and what can be done to act on the results. In so doing, the study brings to light the greatest strengths, as well as the weaknesses, of the philanthropic ecosystem in the arc lémanique, as the region is known in French—because transparency about where things currently stand is a key first step in the process.

Through an iterative process involving dozens of experts and an in-depth literature review, we identified six assessment dimensions with 22 indicators as a holistic proxy for philanthropic sector vitality, as summarized below. We assessed each indicator both quantitatively, using the broadest possible range of available data, and qualitatively, through a stakeholder perception survey taken by 116 respondents in the region in June and July 2019.

Based on the vitality score, which was given on a scale from one star for low vitality to three stars for high vitality, as well as recommendations received through the survey, six action tracks have emerged for the sector. To facilitate action, each recommendation is associated with local and international best practices to guide and inspire practitioners, along with a suggested timeline and potential lead actors for implementation.

Why the Lemanic Region?

Switzerland is a philanthropic nation and well-positioned on many dimensions among leading countries. In spite of the country’s small size, Switzerland has the fourth-most foundations of any country in Europe (with 13,169 at the end of 20182), after Germany, Hungary and Poland. It also holds the third-largest pool of foundation assets (with ca. 100 billion CHF3) after Germany and the Netherlands. In comparison to other European countries, Switzerland particularly stands out for its strong regulatory environment.4,5 Liberal foundation laws, as well as prevailing fiscal conditions, are highly supportive of individual philanthropic action, especially when complemented by the country’s strong culture of civic engagement and rule of law.6

The 2018 Global Philanthropy Environment Index rated countries on five factors: the ease of operating a philanthropic organization; tax incentives; cross-border flows; and the political and socio-cultural environments in support of philanthropy. Switzerland rated third, closely behind Finland and the Netherlands, which just barely surpassed Switzerland’s ratings for cross-border flows and a supportive political environment.7 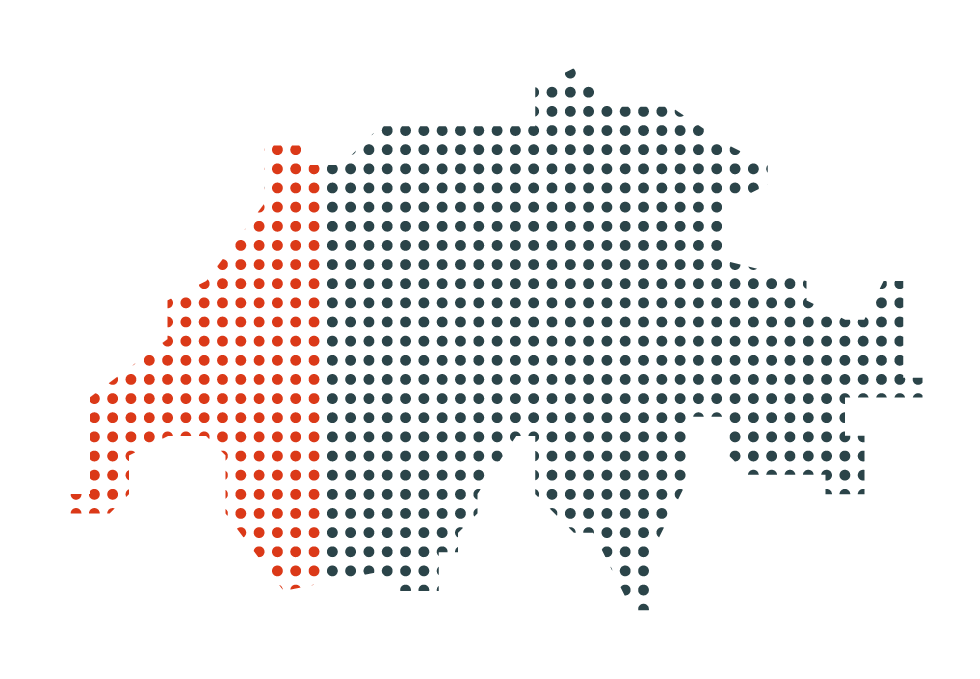 With its 26 cantons, the Swiss Confederation also has a deeply encoded federal structure. As a first step for the development of a vitality assessment methodology that can potentially be adopted at the Swiss national level and beyond, we focused the work of this study on the Lemanic region. We made this choice for two reasons. First, lead funders and researchers expressed a preference for a pilot study, given the lack of precedent for a study of philanthropic vitality. More importantly, the regional characteristics of the Lemanic region, a fairly unique philanthropic cluster, proved compelling. Together, these two cantons represent 2,585 foundations, or nearly 20% of all foundations in Switzerland, significantly higher than their combined share of national GDP of 15.5%. They also experienced among the highest levels of new foundation registrations in Switzerland in recent years (262 and 169, respectively, for Geneva and Vaud between 2014-2018).

Underpinning the Lemanic region’s philanthropic potential is private wealth, a necessary condition for philanthropy. Geneva is a key contributor to Switzerland’s positioning as a premier international private wealth management center in terms of assets managed and competitiveness.8 Geneva and Vaud, moreover, both have fiscal regimes that encourage high-net-worth individuals to reside in the region. The region is home to 40 international organizations and at least 750 NGOs; as such, it constitutes the densest cluster in the world of organizations dedicated to social progress.9 The launch of the Geneva Centre for Philanthropy (GCP) at the University of Geneva (UNIGE) in 2017—which has quickly grown to include researchers and teachers across various faculties—is both an expression of and a contributor to philanthropic vitality of the region. In our data- and science-driven world, effective philanthropy requires upstream research and training competences, and a leading philanthropic cluster would not be complete without such an academic focal point. IMD Business School in Lausanne also has a faculty position in family philanthropy. Together with the presence in Geneva of an office of SwissFoundations, an association including many of Switzerland’s largest grant making foundations, these infrastructural elements have the potential to reinforce each other in the Lemanic region to further increase its attractiveness as an international philanthropic hub and competence center. To fully deliver on the possibilities, however, several additional action steps are needed.

What’s New about a Vitality Assessment?

Rather than rehashing the state of knowledge, the goal of this study is to offer relevant fresh insights.

Switzerland’s two leading associations of philanthropic foundations, SwissFoundations (164 members) and proFonds (roughly 450 members), were founded in 2001 and 1990, respectively.10,11 In 2005, SwissFoundations published the first edition of the Swiss Foundation Code, the first comprehensive manual of voluntary guidelines for grant-making foundations in Europe. The Code establishes best practices for a wealth-creating nation, home to engaged citizens channeling their wealth and time through foundations and non-profits to address social and development needs both locally and internationally.12 Some nine years ago, a further milestone was achieved when Fondation Lombard Odier commissioned the report Advancing Philanthropy in Switzerland, in order to capture the sector’s momentum in both financial and moral terms, and offer concrete recommendations on how to keep up the progress.13

In the past decade, much has been achieved. We can celebrate the continued growth of the philanthropic sector, and in particular, the efforts made by key institutions such as SwissFoundations,14 the Center for Philanthropy Studies (CEPS) at the University of Basel (the creation of which was due in large part to the efforts of SwissFoundations members), Avenir Suisse, and, more recently, the GCP,15 to build knowledge for the sector through research, annual reports, and conferences.16 The opening of the SwissFoundations office in Geneva in the autumn of 2012, covering French-speaking Switzerland, was one of the recommendations put forward in the Advancing Philanthropy report.

Nevertheless, it would be unwise to rest on these laurels. The world is changing. We know that the philanthropic sector must keep doing better, more efficiently. Paradoxically, this is true for two opposing reasons. To solve new and old social and environmental challenges, all countries and local communities need more citizen and philanthropic engagement than ever. At the same time, in light of greater social polarization, this engagement is also increasingly being questioned. With larger wealth gaps, perceptions are growing that all institutions, including foundations (and their donors), knowingly or not, may help maintain the systems that create inequitable outcomes.17 Wealth and its power over influence and action are seen as both sources of, and threats to, social progress.

Furthermore, with continued limited transparency regarding what foundations do and achieve, highlighted in numerous reports in Switzerland (and often a consequence of philanthropists’ modesty and desire to keep their wealth and action private), trust in the sector cannot simply be taken for granted. “Doing and achieving” is not just about transparency: it is also about having the knowledge and ability to achieve a demonstrably positive impact by efficiently and effectively deploying resources to deliver social outcomes.

To stay ahead of these forces, this new study seeks to promote the vitality of the philanthropic sector needed to go to new depths of practice and engagement. Due to their institutional and registered nature, our focus continues to be on public utility foundations as the “tangible” core of the philanthropic sector. At the same time, we did not want to ignore foundations’ links to private philanthropic engagement and direct giving, which are grounded in a shared commitment to act for the public good, nor the enabling conditions that affect both institutionalized and personalized giving. Reflecting on previous studies, we felt that we could add particular value by responding to three gaps in existing scholarship.

First, instead of a one-time report, could we create a robust methodology that would allow us to periodically re-evaluate key sector performance indicators using the same basis of assessment? In the spirit of continuous improvement, such an approach could go beyond creating a common sector development agenda for foundations, government, and sector intermediaries, among others. It could also help maintain momentum through a recurring cycle of assessment, identification of sector development priorities, and action.

Second, following the adage that only what gets measured gets managed, could our assessment be holistic and integrate both quantitative and qualitative measures, shedding the light of inquiry on how the sector is progressing by collecting stakeholders’ perceptions of the same indicators? This would allow us to identify not only knowledge or capacity gaps, but also forward-looking information including beliefs and behaviors in the sector that enable or stand in the way of further progress.

Third, could we ourselves create more trust in the analysis and assessment process by being even more inclusive of sector stakeholders? In this spirit, several foundations joined forces to fund the initiative (see Appendix 3). A veritable incubation exercise with consultations for nearly a year brought institutions together across sectors to design, steer and execute the study. For the first time, in a spirit of partnership, this included key stakeholders like the foundation supervisory authorities of Geneva, Vaud, and the Swiss Confederation; the GCP and CEPS; and the two largest Swiss foundation associations. Dozens of experts were consulted and hundreds of stakeholders reached through both closed and public surveys.