As we began our research into possible indicators that could be used to measure the factors that contribute to the vitality of the philanthropic ecosystem, it quickly became clear that a multi-pronged approach would be necessary. Such an approach would allow us to develop a methodology that would be rigorous, yet practical, and would constitute “action research” that yields relevant recommendations.

To begin with, “philanthropic vitality” itself is not yet a mainstream concept. It was thus often necessary to find and use data collected for other purposes, not all of which ended up being exactly what was needed. In addition, the highly federal and devolved nature of government and oversight in Switzerland means that the two cantons covered by the present study do not always collect the same data or report it in the same way, further complicating the research task. The quantitative portion of the study therefore represented our best attempt to compile a representative and informative assessment.

One of the challenges inherent in quantitative data is that it generally captures achieved outcomes or lagging indicators, whereas we are interested both in the state of the world today and inferences about its state in the future, and thus need to consider forward-looking “leading” indicators as well. We thus decided early on in the process to supplement the quantitative data with qualitative findings from a survey of philanthropic sector stakeholders in the two cantons. Given that one of the key goals of the study was to engage philanthropic sector actors in addressing the challenges that they face on a daily basis, the inclusion of a large number of direct inputs from these very actors allowed the study, remain as relevant as possible, and capture emerging issues. The survey was distributed not only to the staff and boards of foundations, but also to a wide range of intermediaries and service providers, including consultants, lawyers, accountants, and others who deal with philanthropy on a regular basis.

The third component of the study was born out of the fact that the philanthropic sector is supposed to serve the public benefit, but is nevertheless often misunderstood and may sometimes even be distrusted by the general public. We therefore decided to commission a representative survey of 310 total residents of the cantons of Geneva and Vaud, in which respondents were asked a series of questions regarding their understanding of and trust in foundations. In addition to providing a valuable snapshot of public opinion at the present moment, the results can be used for comparison with future iterations of this study to evaluate how opinions change (or not) over time.

The following table provides a succinct overview of the indicators. It contains indicator definitions; the summary of their relevance as derived from experts, articles and studies; the measurement methodology applied to assess each indicator; data sources; and, importantly, the associated question(s) included in the stakeholder and public perception surveys.

Each of the indicators listed above was evaluated quantitatively and qualitatively: the result then needed to be evaluated as positive or not in terms of promoting sector vitality. For example, is an observed level of diversity in boards, or a certain number of identified collaborative platforms, at the level that the sector should aspire to be? The project steering committee built consensus around three potential ratings: three stars for high, two stars for moderate and one star for low. These three potential ratings were applied to both the quantitative and qualitative analyses. For the qualitative perception survey, ratings were assigned as follows: high when more than 50% of respondents agreed or agreed strongly, low when fewer than 50% of respondents agreed or agreed strongly, and moderate for results in between. When the qualitative and quantitative results for the same indicator differed, the project team assigned an overall ranking for the indicator on a case-by-case basis, taking into account the reasoning and data behind each of the two ratings.

Independently of the proposed ratings, however, we encourage all sector stakeholders to make their own interpretation of the indicator result, and to take action where they see most development opportunities according to their own baseline of performance.

Due to the lack of data available on the public’s trust and general understanding of public utility foundations, the LINK Institut was requested to perform a public opinion survey of the general population in Geneva and Vaud, drawn from a pool of 27,000 potential respondents in Suisse Romande between the ages of 15-79. The final sample included 310 people, and, as noted in the text of the main report, the margin of error for the full survey results is +/- 5.7%.

The LINK results in this section represent a sample size of 310 residents in Geneva and Vaud. Descriptive statistics of the sample are in Figure 12. The questions that were asked to the interviewees are listed in Figure 11; please note that, as the Lemanic region is francophone, the questions were asked in French during the survey. 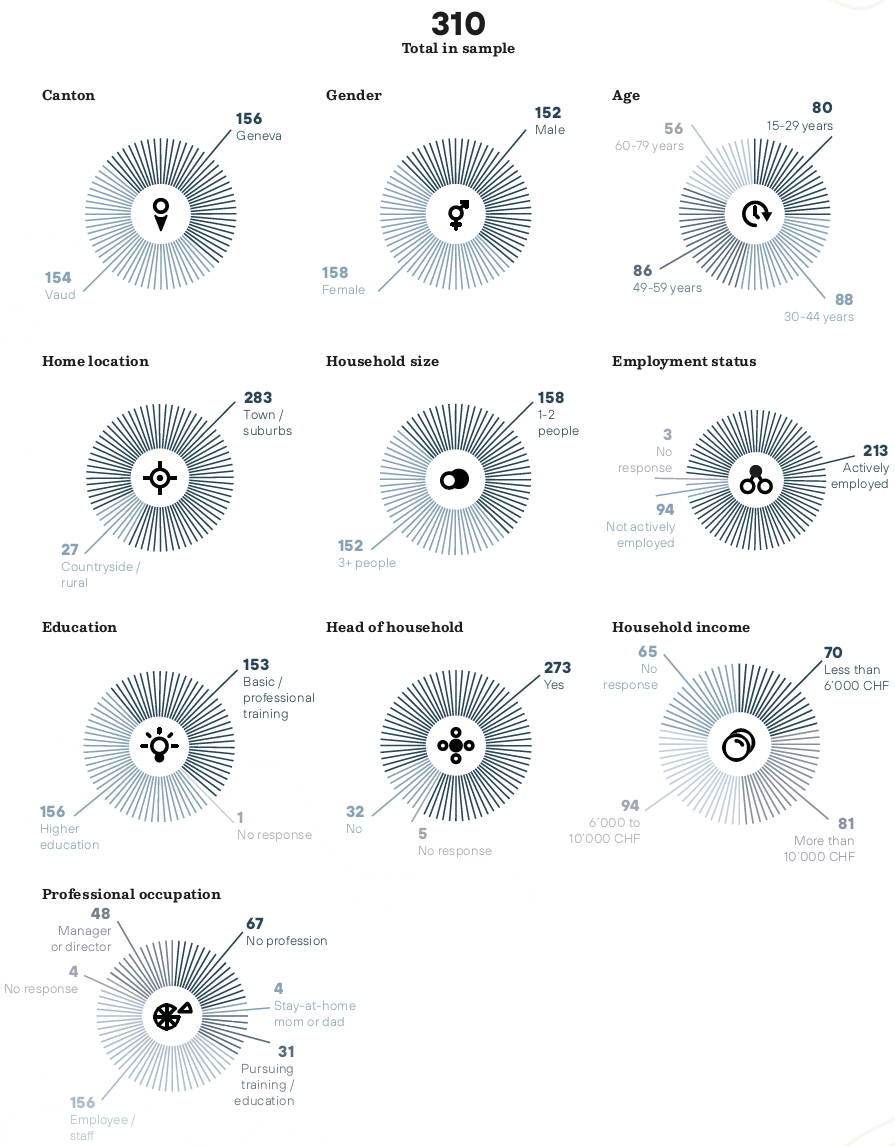 Broadening the partner group in such studies in the future could strengthen vitality assessments even further. This exercise already benefited from extraordinary contributions. The Geneva DDE shared its foundation mapping effort, and this helped accelerate our analysis of online presence and accountability practices. The Geneva and Vaud foundation surveillance authorities shared new data on foundation assets and on the top risks emerging from their oversight activities. CEPS also opened its foundation database, sharing new information about board and staff numbers and diversity. Numerous intermediaries (see the full list under indicator 4.4 in Appendix 2) were also quite forthcoming in sharing information about the growth of their capacity in recent years, and several legal and fiscal experts weighed in on the regulatory context. SwissFoundations and proFonds, along with Fondation Lombard Odier, the GCP, FSG and the DDE, reached out to their respective contact lists for the perception survey, thereby giving over 500 representatives of foundations and other sector stakeholders the chance to evaluate the sector.

Such a partner group could become even more inclusive in the future. First and foremost, if the geographical range under study expands, the governmental representation would need to expand commensurately, including the additional cantons as well as, most likely, greater involvement of the Swiss federal government. We could also imagine a joint review of the legal and fiscal contexts between legal experts and the tax authorities. Increased inclusion of existing partners, such as the federal surveillance authorities in public reporting and risk analyses, as well as more intermediaries (such as AGFA), could also help strengthen the product of future iterations of the study. We would also welcome more funders to support and guide the work, as this pilot initiative required in-kind donations from all the members of the Steering Committee and project team.

Building out the Evidence Base

Connected to the composition and level of trust in the partner group is the opportunity to improve access to key data, as covered in our main recommendations. Foundation surveillance authorities, especially if coordinated between the cantonal and federal levels, could provide new levels of aggregate information, including on foundation spending. This would, of course, require appropriate resources, although resource needs could be diminished by leveraging partnerships with CEPS and/or the GCP. As mentioned above, our regulatory analyses could have been stronger if we had been able to consult with tax authorities at the cantonal and/or federal levels. Foundations themselves will likely become increasingly important sources of data: as more foundations join the global movement on philanthropic transparency, sector-wide analyses on many of our indicators will become more robust. Finally, we would expect to achieve higher stakeholder response rates to future versions of our perception survey, as awareness and trust grows about the relevance and usefulness of sector-wide assessments.

A few of the substantive areas of the report could also be augmented in the future should further data be made available:

A core intent of the study was to create a methodology that could be replicated periodically to trigger new action to boost the sector’s vitality. Ideally, the same methodology would also be easily transferrable to other regions of Switzerland, and could even serve as an inspiration for other countries.

For future iterations of this assessment, it will be important to work with (many of) the same indicators, for comparison’s sake, while remaining open to additions to cover new areas of investigation. Two clear opportunities for methodological development have already surfaced, in addition to the points already noted above. First, while experts and/or publications did support the inclusion of all of the chosen indicators in the final report, the levels and depth of proof available varied from indicator to indicator. A subsequent iteration of the study could devote additional time to research in order to confirm or call into question some of the less-proven indicators. In addition, feedback on this first study and reactions from sector stakeholders will provide useful insights for future indicator selection.

Second, an entirely new category and set of indicators could be developed to focus on beneficiaries’ perspectives on the philanthropic sector. These indicators could, for example, examine the experiences that beneficiaries have when interacting with foundations, the degree to which foundations’ reporting requirements prove onerous for grant recipients, difficulties for beneficiaries in finding appropriate foundation partners, or several other pertinent issues. Despite the clear potential relevance, the perspectives of beneficiaries were not included in the present analysis due to time and resource constraints.

Several factors will be key for any future expansions of the geographical scope of the study within Switzerland. To begin with, linguistic competency will naturally be paramount if the study is to expand significantly eastward. Another very important element of success will be prior consultation with all stakeholders, and in particular the types of organizations listed above as key sources of information. The goal of such a consultation would be to build consensus and excitement for the process and to establish the conditions for data sharing, as it becomes significantly harder to do so once the project is underway.

In summary, we believe that the present state of the methodology and study focus has significant power and was able to yield valuable insights to assess the state of philanthropic vitality in the two cantons under study. Nevertheless, it should be taken as a point of departure for how to rigorously and practically assess philanthropic vitality, rather than the endpoint in methodology development.